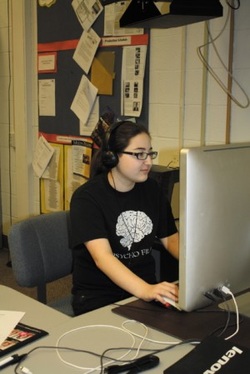 When she decided to enroll in the class, Samantha was simply trying to meet her required practical arts credit. However, the Congregation B’nai Amoona member had no idea what kind of opportunities learning broadcasting would present.

“I really like the true stories and visual medium we get to work with,” Samantha said. “I love all the editing and creative choices.”

After toying with documentary-style filmmaking for her sophomore year final exam, she connected with the medium. As a junior, she continued her involvement with broadcast journalism through Ladue View, the high school’s monthly news program. As Samantha got more involved with the program, her love of telling longer stories developed into a true passion.

“At the end of my sophomore year I was given the assignment to make a 90-second video about 9/11,” Samantha said. “I re- membered a family friend who was in the second tower when the plane hit and he had an amazing story. I interviewed his wife but really wanted to do a piece on him, but I realized how much had to be left out because the video was so short.

“Instead of taking on one project each month, my teacher allowed me to work on telling his story for three months to make a documentary,” she continued. “I fell in love with that longer format and extended time to delve deeper into it.”

Samantha’s talent for movie making runs in the family. Her older brother, Joseph Weil, attends film school at the University of Southern California.

“Currently, I am an independent filmmaker at the School of Cinematic Arts,” Joseph said. “Within the university, I have directed a variety of short films ranging in subject matter from suicidal clowns to undercover cops. Outside of the academic world, I am the managing partner of a production company, Psycho Films, LLC, in California and just signed on to direct my first independently financed feature, ‘Fringes.’”

“He told me to work hard and that I would really enjoy it, and he was right,” Samantha said. “I fell in love with it. I’ve done everything from documentaries to music videos, news features and short features all for Ladue View. Documentaries and the longer format are by far my favorite.”

If movie making is genetic, the Weil family is living proof. Joseph supports his sister and endorses the many benefits that broadcast journalism affords. He knows the many tricks of the trade and has gained  a lot of knowledge through his experience in projects and courses.

“While very different than film, broadcast utilizes many of the same concepts and conventions in a different light to apply emotion, truth, and power to the stories that journalists tell,” Joseph said. “Take risks. Push people. Don’t let anybody tell you which stories to tell or how to tell them. But listen. Give weight to the will of the audience. Be conscious of how and why you are sharing what you are, and always make sure to defend the integrity of your work.”

With all of her work, advice and accomplishments behind her, Samantha prepares to enter college next fall and hopes to earn a degree in broadcast journalism with a concentration in documentary production. She aims to one day become a documentary filmmaker. However, that has not always been her plan.

“For documentaries you really need short broadcast journalism skills but you also need film skills, which is why I enjoy it so much,” Samantha said. “I used to plan to be an elementary school teacher and even took cadet teaching at school but found it was too mundane. That’s a main reason why I like journalism, because it is educational and you can use people’s experiences to tell stories and to educate and inspire people.”

While she is involved in some media projects outside of school, Samantha does most of her work at school where she has access to the equipment. Because Ladue View requires independent work that takes place outside of class, Samantha sees the program as more of a production than a class. Through various independent studies, Samantha has strengthened her connection to Judaism through creating films representative of her personal beliefs.

“Over the summer I made a video for the Faith Shorts Competition for the Tony Blair Faith Foundation and used my experiences to talk about God and religion,” Samantha said. “I do a lot of Jewish-related videos because Judaism has shaped me as a person in my values and extracurriculars. When I make a video, it’s better if I make it about something I’m passionate about or interested in because as a video creator if I’m bored, my audience is bored. But if I’m interested or passionate about something, I at least then have the chance that my audience is going to be interested.”

Samantha’s documentary on the March of the Living, a yearly march that commemorates the death march during the Holocaust by celebrating Judaism while mourning those lost, is her biggest film feat. She filmed the documentary during her own March of the Living experience, where she spent a week in Poland before continuing to Israel.

“The atmosphere that day was very celebratory of the fact that so many Jews came together for this communal experience that we are still here,” Samantha said. “Some liberators and rabbis spoke and it was very emotional. Eventually, I hope to turn my footage into a documentary. I connected with Israel in a way that can only be explained by visiting it yourself. In order to become passionate about Israel, you need to go there and understand that connection.”

Beyond her work so far, Samantha has a bucket list of documentary stories that she hopes to tell during her career. Her main goal is to help people from all different backgrounds gain hope and inspiration from the stories of their peers.

“I really believe that everybody has a story to share and it is a journalist’s responsibility to find those stories,” Samantha said.